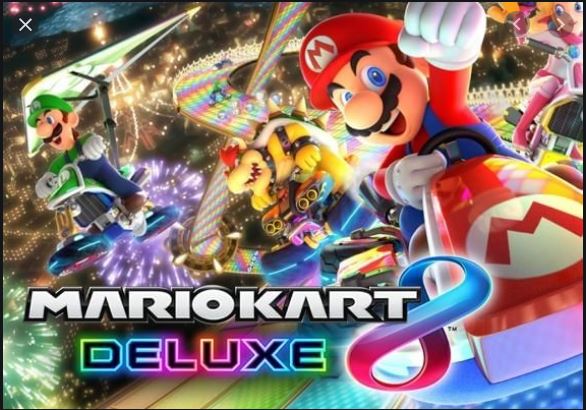 The game features most of the base and DLC content of Mario Kart 8. Content excluded includes Miiverse compatibility, stamps, and the ability to upload highlight reels on YouTube – all of which were discontinued on the Wii U version when Miiverse was terminated on November 7, 2017. Battle Mode has been significantly altered.

Characters that were originally unlockable or exclusive to downloadable content in Mario Kart 8 are available from the start in this game, marking the largest starting roster of any Mario Kart game.

Characters can now carry up to two items at once, even if they do not drag the first item, and the game features the return of the Double Item Box from Mario Kart: Double Dash!!. The game also introduces smart-steering and auto-accelerate for beginners; the former makes driving and staying on the track easier, while the latter makes the vehicle automatically accelerate. If the Smart Steering mode is on, the player’s vehicle will have an antenna sticking out its rear end; this antenna blinks and bends when Smart Steering is activated. There is an additional level of Mini-Turbo, called Ultra Mini-Turbo, denoted by purple (pink in the British English version) sparks that appear after the orange sparks. This new level of Mini-Turbo can only be obtained if smart-steering is off.

200cc engine class for Time Trials has been added (separately recorded from the 150cc Time Trials). There are new staff ghosts for 200cc, while some of the 150cc staff ghosts have slightly different times compared to the original.

The game also features an in-game guide, directly accessible from the game’s menu; this guide explains various techniques, battle mode and the functions of each item. There is also an option to change character and vehicle combinations during an online lobby without having to leave; this is done by pressing Y Button (Single Joy-Con Left Button when playing with a single Joy-Con) during the course selection screen of an online lobby. The game also has reduced loading times when compared to the Wii U game.

Some of the vehicle parts that are exclusive to downloadable content in Mario Kart 8 (i.e. parts included within the Mercedes-Benz × Mario Kart 8, The Legend of Zelda × Mario Kart 8, and Animal Crossing × Mario Kart 8 add-on packs) are now randomly unlocked by collecting coins during gameplay.